A Major Ottoman-Venetian Border Scandal of 1622

Very scarce work about Cattarina Santorovichia, a Turkish girl from the Ottoman sandjak of Clissa (Klis) north of Spalato (Split) in Dalmatia, who crossed into Venetian territory and converted to Christianity. Mihale Satorovic, as she was born, was from a respected and well-connected Turkish family, the daughter of Ahmed Aga, an officer in the local garrison of Clissa, and the affair provoked a major international incident. "Although Venice had been at peace with the Ottoman Empire for almost half a century, the Spalato border was a sensitive area where tensions occasionally flared" (Dursteler, 63). When the girl disappeared in late December 1621, her parents immediately feared that she had been kidnapped and taken to the Venetian side - a relatively frequent phenomenon on the border that occurred for a variety of reasons. Although it was soon established that the girl had not been forcibly abducted, but rather had fled her home of her own free will so as to become a Christian, Muslim sensitivities were ignited. On 23 January 1622 Mihale was baptized "Cattarina" in Spalato, and the attendant ceremonies only intensified the anger on the Ottoman side: indeed, "immediately following Mihale's flight, eight Venetian subjects from the neighboring town of Trau were taken hostage in retaliation" (67), and the threat of military violence caused the Venetians to deploy six armed ships to Spalato. "The flight of Mihale Satorovic was an extremely serious affair that dragged out over five years, and eventually engaged the Ottoman and Venetian military forces, as well as the highest officials in the region and in the respective imperial capitals" (68).

The present oration that recounts part of the girl's history is an important source about the affair. While the occasion is here termed "nozze", it is clearly not a wedding (not even one "con la chiesa"), but apparently closer to a confirmation rite celebrated for the recently converted girl. The author was the parish priest at S. Eufemia in Giudecca, Venice, and dedicates his work to Giovanni Cornaro, Procurator of S. Marco. 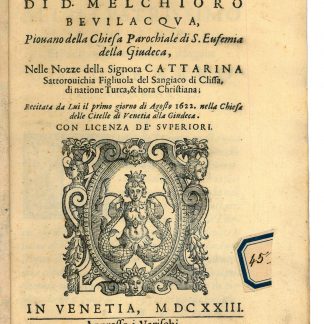