The first printed record of Abu Dhabi and Dubai

First edition of this important travelogue by the Venetian state jeweller and gem merchant Gasparo Balbi, detailing his nine-year voyage from Venice to the Far East between 1579 and 1588, and a work of special historical interest for its eyewitness information about the Arabian Peninsula in this early period. In this book, Balbi was "the first writer to record the place names between al-Qatif and Oman that are still in use today" (G. R. King, p. 74). His "interest in the area lay in the pearls that came from the oyster beds of which the most extensive are those in the waters around al-Bahrayn, those off the Qatar peninsula and especially those in the western waters of Abu Dhabi. Either taking his information first-hand from a local individual or using a navigator's list, Balbi recorded place-names along the coast of modern Qatar, the United Arab Emirates and the Sultanate of Oman" (G. King, p. 248). According to Slot, "practically none of the names of places on the coast between Qatar and Ras al Khaima occur in other sources before the end of the eighteenth century" (p. 36). The present work is also of the highest significance for including "the first European record of the Bani Yas tribe" (UAE Yearbook 2006, p. 20), the largest and most important tribe of the Arabian Peninsula, from which emerged both the Al Nahyan and the Al Maktoum dynasties, today's ruling families of Abu Dhabi and Dubai.

Balbi travelled extensively in the Arabian Peninsula in search of precious stones. He knew "the waters off the Abu Dhabi coast as the Sea of Qatar and mentions the following places now in UAE territory: Daas (Das), Emegorcenon (Qarnein), Anzevi (Azanah), Zerecho (Zirkuh), Delmephialmas (Dalma), Sirbeniast (Sir Bani Yas), Aldane (Dhanna), Cherizan (identified as Khor Qirqishan, just off Abu Dhabi island), Dibei (Dubai), Sarba (Sharjah), Agiman (Ajman), Emelgovien (Umm al-Quwain), Rasa-elchime (Ras al Khaimah), Sircorcor (Khor al-Khuwair), Debe (Dibba), Chorf (Khor Fakkan) and Chelb (Kalba)" (G. R. King, UAE: A New Perspective, 74). From Venice Balbi sailed for Aleppo, proceeding to Bir and from there overland to Baghdad, descending the Tigris to Basra, where he embarked for India. The "Viaggio dell'Indie Orientali" proved to be the most widely read source of information about India throughout the next century. In the tradition of mercantile guidebooks, such as the 14th century "Practica della mercatura" compiled by Pegolotti, this is one of the few secular travelogues to the Orient published in the 16th century. And in addition to providing the kind of practical information required by merchants trading in precious stones among other wares, Balbi, with a jeweler's eye for rarities, allows himself considerable license in recording his personal observations at exotic sights (e.g., the cave Temples of Elephanta and his enthusiasm for elephant tusks f. 100v) or in mentioning incidental occurrences along the way, such as his chance meeting in Goa with the famous embassy of Japanese legates on their way home. Balbi dates his stays to particular places in a precise manner, always gives a careful explanation of the local system of exchange (coins, weights, and measures), describes commercial routes in India in detail and even includes a monsoon calendar. Balbi also discusses Goa, Negapatam, and Pegu (Burma), the latter a source of great fascination owing to its sensational wealth and the section most frequently anthologized in travel collections. The "Viaggio dell'Indie Orientali" was reprinted in 1600 (also rare). The account was translated into Latin and equipped with illustrations in the 1606 'India' volume of the De Bry series, and a partial English translation (above all, the section on Pegu) subsequently appeared in Purchas. An Arabic translation was published in 2008, but a full English translation never appeared. 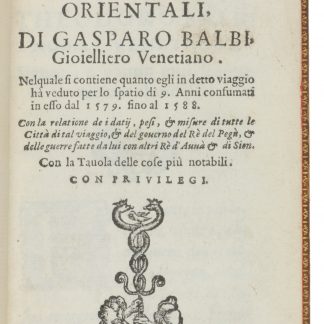