The principal Renaissance treatise on mining

Folio (225 x 326 mm). (8), 491, (13) pp. With printer's woodcut device on title-page and verso of final leaf, a double-page-sized woodcut plate and numerous large woodcuts in the text (some 70 of which are page-sized). Contemporary limp vellum with fore-edge flap.

First translation ever of the principal Renaissance treatise on mining, prepared for German readers by Philipp Bech. Significantly rarer than the Latin first edition (PMM 79) published the previous year, as most of the printed sheets ended up being used for the 1580 second German edition. "A book that has earned its place in history as a masterpiece of Renaissance technical writing and technical illustration" (Hoover). "Treats the entire field of mining and metallurgy, including the overlapping subjects of geology and chemistry, but in particular mechanical engineering and machine technology" (cf. Koch). "Of the 292 woodcuts, 269 concern mining, economic geology, surveying instruments, tools and machinery, mine workings, and even salt production from the sea, a glass foundry, etc. They were cut in Basel after designs by Basilius Wefring of Joachimsthal. At least two known masters had a hand in the woodcuts: the draughtsman H. R. Manuel Deutsch from Bern and the woodcutter Z. Specklin from Strasbourg" (Horst).

Light, mostly even browning throughout; some fingerstaining to title with edges somewhat frayed, but well preserved in the unusual and entirely contemporary limp vellum binding with a generous flap protecting the fore-edge. Early 16th century bibliographical note concerning Porta's "De refractione" penned to lower pastedown. Provenance: early handwritten ownership of "Andreas Virizius" on front pastedown. While the "possessor huius libri" calls himself a "conterfecter" (portrait painter), he may be identical with the like-named student of the Flemish humanist Justus Lipsius who flourished in Danzig around 1599, gave private instruction and produced several translations from Latin into German (cf. Jöcher IV, 1645). 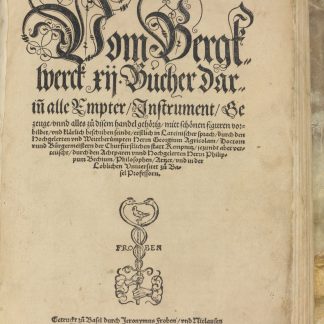