First edition of the Pentateuch in Arabic

4to. (16), 458, (2) pp. (including errata leaf). With the title in a woodcut architectural frame. Contemporary blindstamped leather on four raised double bands. Edges coloured and goffered.

"First printing of the Pentateuch in Arabic characters" (Smitskamp). Edited by Thomas Erpenius and printed with his influential nashk Arabic types, cut under his direction by Arent Corsz. Hogenacker in Leiden. It gives the text of a 13th-century translation of the Pentateuch in the Maghreb dialect (spoken in Mauritania). Erpenius was one of the most distinguished orientalists and by far the best Arabist of his day. He published an influential Arabic grammar and several excellent critical editions. His own private printing office, equipped with Hebrew, Arabic, Syriac, Ethiopic and Turkish type, produced its first works as early as 1615.

A few ink marginalia in Arabic and Latin by a contemporary scholar. Contemporary but not original binding rubbed with some discoloration; interior shows light dampstaining to margins; a few edge flaws. 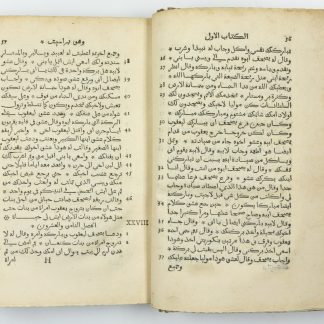