[Chinese Civil War]. Draft of the Constitution of the Republic of China.

A fascinating 'working copy' of the Constitution of the Republic of China during the 'Nanjing Decade' of relative prosperity, cut short by the Japanese invasion of 1937. The present copy was probably owned by a diplomat involved in drafting the document, who has added numerous corrections to the printed text in manuscript in Chinese, English, French, and Italian.

This draft constitution was composed during a period of strength for Chiang Kai-Shek's Kuomintang Party, and the original draft (dated 16th October 1934) and its corrections (dated 25th October 1935) coincide almost exactly with the dates of the Long March of the Red Army, 16th October 1934 - 22nd October 1935. While the Communist Part of China under Mao Zedong and Zhou Enlai regrouped in Northern China, the Nationalists declared Nanjing as their capital and, eager for Western recognition of the legitimacy of their government, invited foreigners to assist in drafting a new constitution. Although a final draft was ratified (and printed!) in 1936, the project was put on hold following the outbreak of war with the Japanese in 1937.

Certain elements of this draft echo contemporary concerns which transcended political boundaries, for example with the well-being of the worker and the improvement of agriculture: "In order to improve the workers' living conditions, increase their productive ability and relieve unemployment, the State shall enforce labor protective policies… Labor and capital shall, in accordance with the principles of mutual help and cooperation, develop together productive enterprises. In order to promote agricultural development and the welfare of the farming population, the State shall improve rural economic and living conditions and increase farming efficiency by employment of scientific farming. The State may regulate the production and distribution of agricultural products in both kind and quantity" (Articles 138-140, here corrected to 126-128). The role of education is seen as "to develop a national spirit, to cultivate a national morality, to train the people for self-government and to increase their ability to earn a livelihood, and thereby to build up a sound and healthy body of citizens" (Article 143 [132]).

We have located copies in OCLC at Harvard, Yale, Duke, Stanford, Leipzig, and Leiden. A 'final version' of the draft constitution was published in 1937, consisting of 53 pp (OCLC 4294581), which is more common in census. 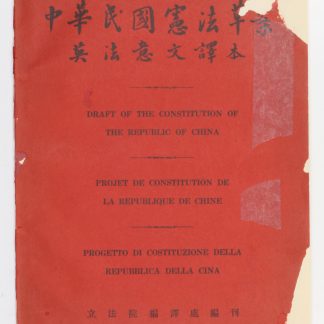