Portuguese discoveries in the East

Extremely rare: the complete run of this highly interesting periodical published by Portugal's Colonial Maritime Association. Created by Royal Charter in November 1839, the Association was a product of the 1836 "Setembrismo" Revolution. Headed by a group of naval officers, it was supposed to investigate the state of overseas possessions and the causes of the rapid decline of the merchant navy, to highlight the need for naval training, and to investigate new commercial relations. The "Annaes", the Association's house journal, concentrates on the history of Portuguese discoveries in the East, but also voyages to North America, and offers several previously unpublished documents concerning the Portuguese presence in overseas regions, including Portuguese navigators' reports to monarchs. A separate section discusses pearl fishing on the "costa d'Arabia, especialmente na ilha Baharem" (Bahrein, vol. 2, p. 313f.), while the loss of Ormuz is treated in an investigation into the decline of Portuguese possessions in Asia (p. 60). The narrative of a land journey from India to Portugal in 1565 (vol. 5, p. 214ff.), here published for the first time, also mentions the Fortress of Ormuz, which had given the Portuguese full control of the trade between India and Europe passing through the Arabian Gulf since Afonso de Albuquerque's conquest of the island in the early 16th century. In 1622, an Anglo-Persian force wrested the garrison from Portugual, thus opening up the Gulf trade with England.

Some occasional light browning and foxing, but generally in fine condition. 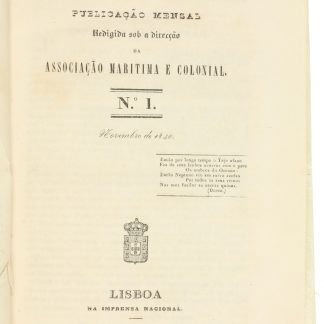