"Mr Woodville's account differs considerably from M. D'Apres but I cannot presume to decide who is right"

First edition of a rare pamphlet on the monsoon winds in the Indian Ocean, of crucial importance for East India Company ships sailing to and from the East Indies.

As Dalrymple states in the introduction, the text for the pamphlet has been translated by him from Jean Baptiste d'Après de Mannevillette's "Mémoire sur la navigation de France aux Indies". Dalrymple had extensive correspondence with Mannevillette, hydrographer to the French East India Company and Dépôt de la Marine, from 1767 to 1780, much of which is preserved in Paris in the Archives nationales and the Bibliothèque de l'institut de France. Dalrymple had such high regard for d'Après - the author of the "Neptune Oriental" in 1745, at the time the most authoritative work on oriental navigation - that he often sent charts for comment and inclusion into his work, as the following letter attests: "You have full consent to make what use you please of the Charts I have sent you [...] You will undoubtedly find many mistakes which escaped my observation; And therefore you will do me a favour in communicating your remarks to me" (10 Nov. 1772). In the present work Dalrymple has augmented the d'Après text with information from a Mr. William Woodville of Liverpool, and a Captain Jones of the ship Mary, "whom we met at Grenville 5th June 1775, to the Westward of Sierra Leon. It is obvious Mr Woodville's Account differs considerably from M. D'Aprés but I cannot presume to decide who is right".

The extract not only shows Dalrymple's continuing quest for any and all sources of information regarding a passage to the East Indies, and the rather ad hoc nature in which he obtained it, but also his willingness to question Mannevillette's findings, at the time the leading authority on such matters.

Some waterstaining to title with marginal fraying. Rare: we are only able to trace one other example appearing at auction since the war (Sotheby's, the Franklin Brooke-Hitching sale 2014). 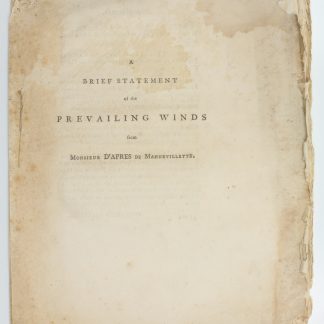