Massive navigational directory, this edition updated with information on the north eastern coasts of Africa and Arabia

Horsburgh, James. The India Directory, or, directions for sailing to and from the East Indies, China, Australia, and the interjacent ports of Africa and South America [...]. Seventh edition.

Rare revised and expanded penultimate edition of a massive navigational directory, with exhaustive information on the Arabian Sea, the Red Sea, and the Arabian (Persian) Gulf. Including detailed entries on Sharjah, Dubai, Abu Dhabi ("Abothubbee") and Bahrain, not only covering navigational details, but also the inhabitants, pearl fishery, geography, commerce etc., and shorter entries on islands such Sir Bani Yas, Zirku etc. For this edition expanded from the "extensive surveys along the N.E. coasts of Africa and Arabia, and into the Gulf of Cutch, compiled from the meritorious labours of Captain Haines, Carless, and Sanders, Commander Campbell, Lieutenant Grieve, and other officers of the East-India Company's Marine service" (preface). It was compiled chiefly from recent journals of ships employed by the East India Company, by James Horsburgh (1762-1836), hydrographer and chart maker to the Company. "As hydrographer Horsburgh was primarily responsible for supervising the engraving of charts sent back to London by marine surveyors in India and ordered by the company to be published, and for examining the deposited journals of returning ships for observations which would refine the oceanic navigation charts currently in use, besides other duties of provision of information laid on him by the court" (Cook). The book appeared in a total of eight editions between 1809 and 1864 before being superseded by Findlay's "A directory for the navigation of the Indian Ocean" (1869).

With the seller's ticket of George Sweetser, "dealer in sextants, quadrants, telescopes and compasses, nautical books & charts, …" and the early owner's inscription of "Wm. A. Ordway, Bradford, Mass.". Some browned corners in the opening leaves and some tiny waterstains in the head margin of volume two, otherwise in very good condition. Bindings rubbed and rebacked. 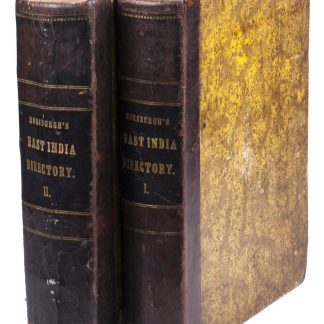