To the father of the Belgian flag, shortly before writing the Communist Manifesto

Unpublished, early letter in French, Marx's only known missive to the Belgian journalist and politician Lucien-Léopold Jottrand (1804-77), who during the Belgian Revolution of 1830 had designed what would become the national flag of Belgium: "J’ai l’honneur de vous faire parvenir l’original de mon petit discours inséré au Northern Star. Je me fais un Plaisir d’y ajouter un exemplaire de mon livre contre M. Proudhon [...]". Five days previously, at a Brussels "Workers' Banquet" led by Engels and Jottrand, it had been decided to found a "Democratic Association", and Engels was elected to its organising committee. Engels had warned Jottrand that he might have to leave Belgium and thus would be unable to serve; his suggested replacement was Marx. Indeed, on the 30th of September, Engels officially wrote to Jottrand that circumstances would require his absence: "I therefore request you to call on a German democrat resident in Brussels to participate in the work of the committee charged with organising a universal democratic society. I would take the liberty of proposing to you one of the German democrats in Brussels whom the meeting, had he been able to attend it, would have nominated for the office which, in his absence, it honoured me by conferring upon myself. I mean Mr Marx, who, I am firmly convinced, has the best claim to represent German democracy on the committee. Hence it would not be Mr Marx who would be replacing me there, but rather I who, at the meeting, replaced Mr Marx [...]" (cf. MEGA III.2, p. 110). On the same day, he advised Marx of the content of his letter to Jottrand, adding: "I had in fact already agreed with Jottrand that I would advise him in writing of my departure and propose you for the committee. Jottrand is also away and will be back in a fortnight. If, as I believe, nothing comes of the whole affair, it will be Heilberg’s proposal that falls through; if something does come of it, then it will be we who have brought the thing about. Either way we have succeeded in getting you and, after you, myself, recognised as representatives of the German democrats in Brussels, besides the whole plot having been brought to a dreadfully ignominious end" (cf. p. 105). Under the influence of Marx, the Brussels Democratic Association would soon become one of the principal hubs of the international democratic movement, and the present letter constitutes Marx's formal introduction to its president, Jottrand. Notably, Marx included with his letter the manuscript of a piece he had written for Engels's "Northern Star" as well as his recently published "Poverty of Philosophy", an attack on Proudon’s "Philosophy of Poverty" and a pivotal work in Marx’s thinking. Here, Marx memorably described his opponent as "petit bourgeois" - an epithet which resounded in all later Communist literature. Marx’s book paved the way for the Communist Manifesto, written between December 1847 and January 1848.

Marx dated the letter "2 octobre" from his Brussels address in the rue d’Orléans; the letter is erroneously docketed "1848" in another hand. Vertical and horizontal folds, but well-preserved. 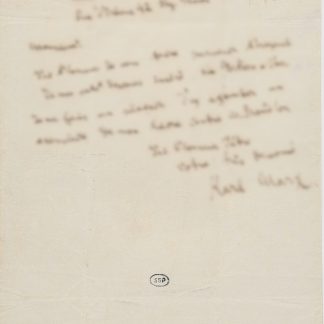