One of the first small-format editions of a classic textbook on rhetoric, with a message for today

Small 8vo (145 x 100 mm). (4), "269" (= 367), (1) ff. With a title-page containing only the author's name, but with the title in the heading to liber I, Giunti's woodcut device (a decorated fleur-de-lis, in this case on a platform and supported by 2 figures with cornucopias) on the verso of the otherwise blank final leaf, a roman capital used as a 2-line initial for the dedication, another as a 3-line initial for the preamble to the main text and a space (with a guide letter) left for a manuscript initial (mostly 6-line) opening each of the 12 libri, not filled in. Set entirely in an Aldine-style italic (with upright capitals).Vellum (ca. 1850?), sewn on 4 cords, with a hollow back, blind-tooled double fillets, gold-tooled red morocco spine label, headbands in blue and white, Stormont marbled endpapers (grey spots with brown and white veins).

The first and only Giunta edition (one of the first in small format), in the original Latin, of the standard classical textbook on oratory and rhetoric by Quintilian (ca. 35-ca. 95/100 AD), in many respects the greatest orator between Cicero and Quintilian's own student Pliny the younger. It is refreshing today for its emphasis on the importance of the speaker's integrity, arguing that to speak well for a good cause requires character and morality. The Cicero-Quintilian-Pliny school was critical of orators they saw as promoting causes using clever tricks or florid language, or by appealing to the listener's worst qualities. They criticised Hortensius, Seneca and Regulus. Quintilian's Institutiones oratoriae, his only surviving work, also serves as one of our most important sources of information about education and culture in Roman antiquity. It not only teaches the theory and practice of rhetoric in speaking and writing, but also discusses the education and life-long development that an orator needs. Quintilian also advises the reader on the best authors on the subject, providing a critical examination of the history of rhetoric.

Quintilian was born in Córdoba in Andalusia, but his father sent him to Rome to study rhetoric early in the reign of Nero. He returned to Spain for a few years around 60-68 AD but returned to Rome as part of the retinue of the Emperor Galba, Nero's short-lived successor. After Galba's death, during the chaotic Year of the Four Emperors that followed, Quintilian opened a public school of rhetoric. He gave up teaching and presenting pleas in 88 AD and devoted himself to writing his Oratoria.

Though contemporaries recognized Quintilian's quality and influence, the modern world knew his work only from fragments and by reputation until Poggio found a complete manuscript of the Oratoria in 1416. It was first published at Rome in 1470 and Nicolas Jenson produced a better edition in 1471. Although more than a dozen editions appeared before 1515, most were folios or large quartos that only a limited audience could afford. The first small format edition, an octavo, appeared at Lyon in 1510, one of only two smaller than quarto before the present. The Lyon edition clearly owned much to the Aldine approach, setting the text in an Aldine-style italic, but Aldus himself produced no edition until his small quarto of 1514, a few months before his death. Nicolò Angeli dal Bucine edited the present edition, but Giunta clearly took Aldus's 1514 small quarto, edited by Andrea Navagero, as model for the text and layout (both are set entirely in a single size of italic type, a style Aldus introduced in 1501). He printed it well: Dibdin singled out the present edition for its presswork, mentioning no other except Jenson's. As in all early italics the capitals are upright, so occasional lines or words set entirely in capitals (sometimes letterspaced, but not as consistently as in Aldus's edition) provide graphic distinction without a second size or style. The compositors accidentally followed page 199 with page "100", continuing from there but skipping 253-254 and making a few other errors. We transcribe the title as it appears in the heading to liber I. In most libri it appears as Oratoriarum institutionarum.

With some transparent stains in the upper outside corner, barely visible after the first 3 leaves, and occasional minor foxing or browning, also mostly in the first few leaves, but otherwise in very good condition and including the final leaf with only Giunta's woodcut device, often lacking. The binding is rubbed and slightly loose, with the front hinge split, but the bookblock remains structurally sound. One of the earliest small-format editions of a classic of rhetoric and of the history of education. 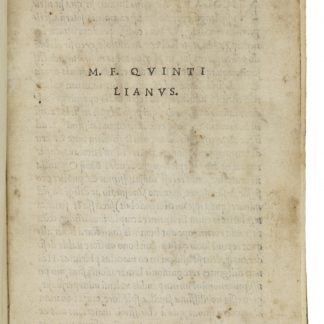