Dante's metaphorical banquet in prose that inspired his Divine comedy

Small 8vo (150 x 100 mm). (8), 112 ff. With the title in a woodcut border with 6 putti (without wings) and 8 fantastic beasts in and growing out of stylized foliage, incorporating Sessa's device (a cat with a mouse in its mouth) in the foot; Sessa's woodcut device (cat with a mouse in its mouth, now in a crowned wreath with initials MS) on the otherwise blank final page; 1 woodcut decorated initial (as S designed with a gap in the central stroke to accommodate the profile of a man, possibly intended as Dante). Set in an Aldine-style italic (with upright capitals).19th-century (?) sheepskin parchment , sewn on 3 recessed supports, sprinkled edges.

Fourth edition (the last before 1723) of Dante's important philosophical allegory in autobiographical form, expressing his love of wisdom and knowledge personified as a beautiful lady named Philosophy, and his view that they lead to virtue and worldly happiness. Dante presents the story as a metaphorical banquet where he is content to eat the crumbs that fall from the plates of the wise: "the first extended piece of original expository prose in the Italian vernacular" (Lansing). Dante began work on it around 1304, ten years after completing his verse Vita nuova, his elevation of courtly love poetry into sacred love poetry that centred around his love for the beautiful and virtuous Beatrice, an idealized picture of a real lady of the Florentine court who died in 1590. In the intervening years he had developed a great love for philosophy, literally meaning the love of wisdom (a deep understanding of human nature and the physical universe) that leads to virtue. This idea was to infuse the Convivio. He finished only four of its projected fifteen "trattati", and never widely circulated the Convivio during his life, but it represents a turning point in his writing. It appears to have given him a new inspiration so that he set it aside around 1307 to begin work on his Divine comedy, where he returned to verse but merged his first love, the more human and religious Beatrice of the Vita nuova, with his new love, Philosophy, to create the new version of Beatrice that he honours in the Divine comedy. The first treatise introduces the story, while each of the others begins with a canzone expressing a particular aspect of Dante's love for Philosophy, followed by the main text explaining its literal and symbolic meaning. The whole therefore forms an encyclopedia of secular knowledge, intended for the education of both men and women. It also passionately pleads for the use of the Tuscan vernacular Italian at a time when learned works were usually written in Latin. The fourth book was politically subversive, proclaiming that the love Dante describes ennobles the soul, and attacking the Holy Roman Emperor Frederick II's notion that nobility comes from inheritance and manners. Many elements, including the cosmology, return in the Divine comedy.

All surviving manuscripts of the Convivio are believed to derive from a single lost manuscript that was unfortunately corrupt, so the work has long been a challenge to its editors. It was first printed at Florence in 1490 under the title Convivio, the "amoroso" of the present title being added for the second edition published at Venice in 1521, emphasizing the importance of love in Dante's text. "Convivio" means banquet, but like the English convivial, its etymology (living together) gives it connotations of the pleasures of human relations. The text of the present edition follows that of 1521.

With numerous points in the text marked by a charming contemporary manuscript pointing hand in the margin. In very good condition, with only a tiny hole on the edge of the woodcut border, a small hole where the ink of one marginal pointing hand has eaten through the paper and an occasional minor spot. An unfinished work by Dante, important in its own right, as an early example of literary Italian prose and as part of the genesis of the Divine Comedy. 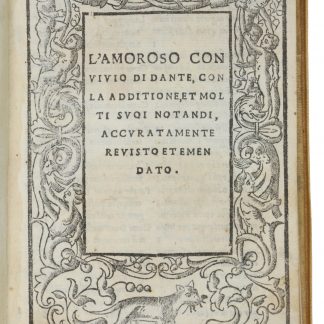