4to. 24 pp., including two black-and-white plates. Text in English and Polish. Bound in printed card covers as issued.

Sole edition of this extremely rare publication, printed for private circulation, describing with great excitement the Polish programme of Arabian horse-breeding in the 1930s. On the eve of WWII, Dr George White visited the Polish State Stud and provides an invaluable record of the horses kept there, listing the stallions and mares he saw by name, as well as the names of those recently deceased. In 1939-40, many of Poland's prized Arabians were confiscated by the Russian and German armies, virtually demolishing the breeding programme in that country.

White had travelled the world comparing Arabian horses, having visited Egypt already in 1929 for that purpose, but was awestruck by what he discovered in Poland: "I had seen Arabian horses on four of the five continents of the world, but never before had such an Arabian horse display been exhibited before me ... The Polish Arab is superior in all material respects to the Egyptian". The plate at the end depicts "the author's conception of the world's two greatest living Arabian stallions - Kaszimir and Ofir", belonging to Prince Witold Czartoryski and to the Polish State Stud respectively, and White offers the prediction that "the day is not far distant when the countries of the world will be looking toward Poland for suitable foundation stock in the form of mares and stallions to either start or improve their Arabian horse breeding projects".

Rare: OCLC shows two copies worldwide, at the National Library of Poland and the British Library. 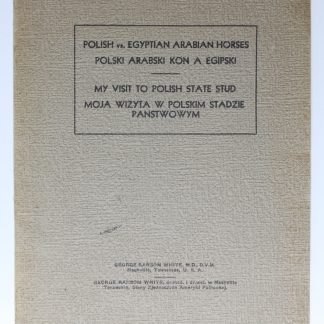