"To all Arab peoples greetings and peace be upon you"

A curious document, issued for the use of American servicemen in the Middle East during the Second World War. It was clearly meant to be employed when a soldier was lost or had been separated from his command, as it asks "Arab peoples" to help the bearer of the document. This plea, attributed to Roosevelt, is printed in Arabic, English and French. The back of the card also features seven useful words and phrases, in English and Arabic.

A touch worn, light staining to back of card. 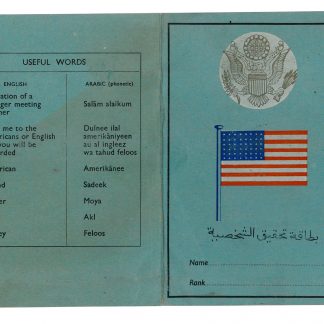