A manual of "geographical, economic, historical, social, religious and political" information compiled for the British delegates to the Peace Conference that took place in Versailles in 1919, here issued "for public use" for the first time. The extensive section on the Arabian coastal regions includes not only detailed statistics (giving the population of Abu Dhabi, Dubai, and Sharjah at 6,000, 20,000, and 15,000 inhabitants, respectively), but also, in a separate appendix, the full text of the treaties signed between the United Kingdom and the Sheikhs and rulers of the "Trucial Coast" in 1820 and 1853, including the names of all signatories: Sh. Hassan bin Rahmah for Ras al-Khaimah, Sh. Shakbout for Abu Dhabi, Sh. Zayed bin Syf for Dubai, Sh. Sultan bin Suggur for Sharjah, Sh. Rashid bin Hamid for Ajman, Sh. Abdullah bin Rashid for Umm al-Quwayn, etc.

Binding slightly stained. Withdrawn from the University Library of Manchester (their ownership, bookplate, and deaccession stamp to endpapers). 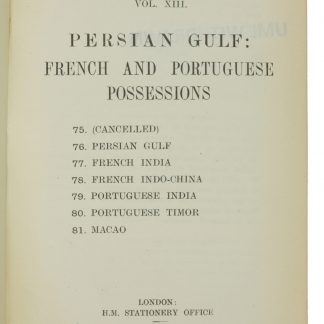