To his private secretary Sydney Cockerell (1867-1962), concerning photographs and a visit to the Merton Abbey Mills: "Thank you very much. When am I to have the photos? I may as well have the duplicates as they cost so little. By all means come to Merton: meantime I shall be at home Sunday afternoon if you can come in [...]".

Sydney Cockerell, who would later go on to serve as the director of the Fitzwilliam Museum (1908-37), worked for Morris from 1891 or 1892 onwards. Morris's sojourn at Tunbridge Wells is probably in connection with his deteriorating health.

Some foxing. Traces of former mounting. 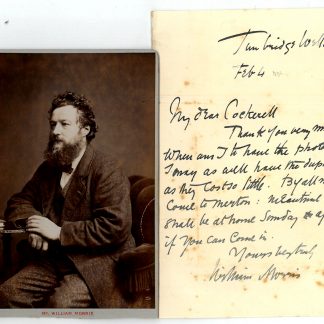