To Lord Frederick Cavendish (1836-82), then Financial Secretary to the Treasury concerning the Stagsden Estate-scandal: "I have just been reading C Gores [?] account of the Stagsden Estate it seems financially a most disastrous business. The Crown purchased an Estate of 3.369 acres out of repair for £130,000 [...]. They have spent on it £22,000 | Total cost £154,000 for this they get £4,312 nominal rent | £3,307 actual rent. At the nominal rent thus it could be 36 years purchase; at the actual rent it is more than 46 years purchase. The money had been invested to yield a precarious 2 per cent & that without any grant on residential advantages of any rent. But as a simple money investment. Surly this is not good management [...]".

The poor management of Stagsden Estate, Bedfordshire led to a public scandal when a tenant committed suicide over debt and accused the Crown Agent to be his murderer. In a debate at the House of Commons James Howard (1821-99), the member for the Bedford constituency addressed the issue and critizised Prime Minister Gladstone: "This estate was purchased by the Crown seven years ago from the trustees of Lord Dynevor; and since then the imperious treatment and the rack-renting of the tenants had been a public scandal throughout the county. Not long since one of these tenants committed suicide, leaving behind him a memorandum, [...] so far as he remembered, to the effect that the Crown Agent was his murderer; and there was evidence produced at the Coroner's inquest to show that this man had repeatedly declared that he could not live under the Crown. The Prime Minister had understated the rent of this unfortunate man, and had said nothing about the tenant having to pay the tithe, insurance, and other matters. The rent altogether was 38s. 5d. per acre, and this for some of the poorest land in Bedfordshire" (Mr James Howard, House of Commons, Deb 02 June 1881 vol. 261 cc1867-73).

Collector's note verso saying: "Stagsden Estate - what a bad bargain its purchase was!". With stamped ensign of the "Secretary of State Home Department". 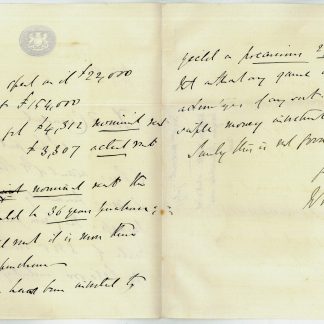