To Lord Frederick Cavendish (1836-82), then Financial Secretary to the Treasury: "I have been talking to Robinson about the amendment to our last Relief Act, & I send you his Minute - I think we must make the amendments he suggests with regard to the loans or we shall not keep the understanding upon which the act was found - on the other hand I think we may leave the grants section as it stands - Grants were only to be made if we found it impossible to get the guardians to give the necessary relief without them - Robinson tells me that no grants have been made - that £20.000 has been already lent, which if we make the necessary alteration [...] all to be paid out of Church Surplus Fund & that he thinks £20 or 30.000 more will have to be lent, so he expects to keep well within the £100.000 which he mentioned to one of you people as his maximum pull upon the Church Fund [...]".

William Edward Forster was Lord Cevendish's predecessor as Chief Secretary to the Lord Lieutenant of Ireland. On May 6, 1882, the day Cavendish took his office in Dublin, he and the Lord Lieutenant Earl Spencer were assassinated by Irish nationalists.

On stationery with stamped ensign of the "Chief Secretary[']s Office Dublin Castle". Letter and Photograph with traces of old montage verso. 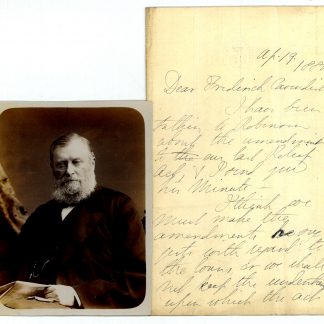