8vo. 1¼ pp. Together with a portrait photograph.

To Lord Frederick Cavendish (1836-82), then Financial Secretary to the Treasury: "My dear Cavendish - Many thanks. I think my uncle's position very fair. Could you not send one of your men down to enquire into the possibility of what I propose. It seems very anomalous that fisheries and the fine arts should be inseparably connected in Scotland! But all that I propose is that the Board should extend their benevolent care to salmon as well as herrings - Would you dine with me Wednesday March 1; on second thoughts I know you cannot because of the Speaker's dinner [...]".

Lord Cavendish was appointed Chief Secretary to the Lord-Lieutenant of Ireland later that year. On 6 May 1882, the day he took his office in Dublin, Cavendish and the Lord-Leutenant Earl Spencer were assassinated by Irish nationalists.

On stationery with embossed letterhead "Secretary Of State / Home Department". 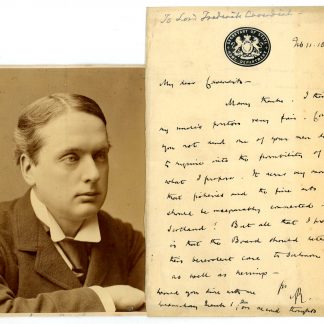