4to (135 x 193 mm). (160) ff. (signed aa-dd8; a-y8). With colophonic title-page on verso of y4. Bound in 16th or early 17th century gilt-ruled Spanish calf with gilt ornaments at corners and on spine as well as faded armorial or emblem on center of both boards. All edges stained dark blue. A few scored early inscriptions on title-page including of 'Petri Cendra'; front endpaper laid onto pastedown. Some unobtrusive staining to inner margins throughout due to binder's glue; a few leaves with dampstains to lower corners; and a few signatures foxed due to paperstock. A neat, broad-margined copy in an early binding.

Editio princeps of this apocryphal text celebrating the medieval ideal of the 'strong' or 'valiant' woman - certainly an unusual theme for an incunable, and an important reflection of idealized female conduct in the early Renaissance. The present copy is found in a well-preserved binding with ownership inscriptions indicating the book's migration to Spain perhaps as early as the late 16th century.

Long attributed to Albertus Magnus, the present work has enjoyed a recent resurgence in interest thanks to modern scholarship focusing on women in medieval Christianity. De Muliere Forti takes as its scriptural starting point verses 10-31 of Proverbs 31, which contain some of the most outspoken praises of women in the Bible: "Strength and beauty are her clothing… She hath opened her mouth to wisdom, and the law of clemency is on her tongue…" etc. In De Muliere Forti, various parts of a woman's body (feet, hands, arms, loins, breast, womb, etc) are treated as symbolic of the virtues of the 'valiant woman'; overall the text "show[s] readers how a male Dominican thought about gender and, in particular, women in the high Middle Ages" (The Valiant Woman, p. iii). On the other hand, an allegorical interpretation refers to the Church herself as the 'Valiant Woman', and "one could say that [the author] radicalizes the tradition by writing an entire theological treatise on ecclesiology on the basis of the Song [of Solomon]. The opening words of the book state simply: Laudes Ecclesiae describit Salomon in figura mulieris fortis, 'Solomon lists the praises of the Church in the figure of a valiant woman,' and the rest of the work gives a theological elaboration of that assumption, interspersed with philosophy and Aristotelian physics (for example on the formation of snow, in connection with verse 21)" (Wolters).

The title-page inscription of 'Petri Cendra' - a distinctly Catalonian surname - is somewhat puzzling, as it is the name of a famous 13th century (d. 1244) Dominican monk resident in Barcelona. The inscription may reflect a reader's authorial attribution - which would be an interesting piece of the historiographical puzzle - or, a later monk may have taken on the same 'nom de religion' as his illustrious predecessor. 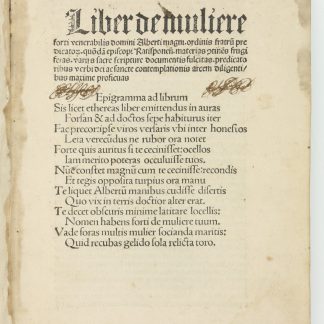