From the Library of Vittorio Emanuele III, King of Italy

First edition of this detailed study of the Hajj by the French doctor and Inspecteur Général du Conseil sanitaire in Egypt, Firmin Duguet. The first part discusses the Hajj from a religious and social point of view, while the second and third parts examine the pilgrimage from a sanitary perspective, focusing on the cholera epidemic of 1865-1930. The work is illustrated with photographs of pilgrims, and of Mecca, Arafat, Mina, and Medina.

"The true subject of this book is not named in the title, yet two-thirds of the whole are given up to cholera. To introduce his subject the author gives a description of the pilgrimage which is so readable that it is almost ungracious to say that one or two points are open to criticism [...] In the body of the book the author describes the epidemics at Mecca, the hospitals (!), the development of preventive measures outside the Hedjaz, and his hopes for the future. The policies of the Turks, King Husain, and Ibn Sa'ud, the change in defence from long quarantine to inoculation and disinfection, and the growth of the International Sanitary Conference are explained. He records inhuman wickedness and magnificent courage and generosity. A squeamish layman should not read some of the pages just before dinner or bed [...] The conclusion is that all pilgrims should be protected by inoculation against cholera, plague, and smallpox before leaving their homes [...] There are a few misprints, one of which makes the name of Dr. Olschanietzki even less pronounceable than it is by nature. A very useful book" (A. S. Tritton, book review in: Bulletin of the School of Oriental Studies VII, 1 [1933] 224). 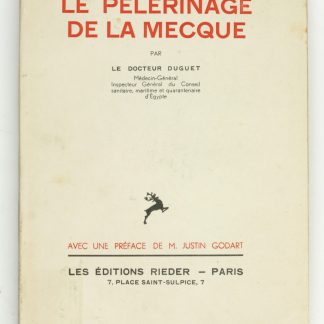