In August 1908 Houdini had begun his second European tour, starting in Germany, where he enjoyed a particularly enthusiastic audience with his recently developed "milk can trick".

It is surprising that Harry wrote directly to his sister, who had been almost blind since childhood and probably could not have read the card without help. Remarkably, the stamp is affixed at an angle turned 120° to the right: in the "stamp language" common between lovers of the time, this was as much as to say: "I dearly long for you", "You are my happiness" or "Always thinking of you". Another Houdini mystery? 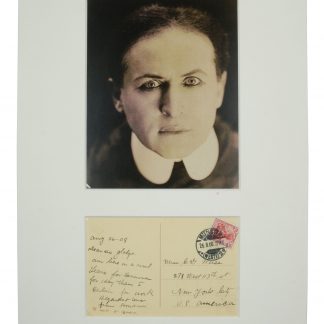