All of the Soviet Union's 1:200,000 General Staff map quadrangles showing the United Arab Emirates: from the Russian series of maps produced during the Cold War, based on high-quality satellite imagery, but usually also ground reconnaissance. Assembled continuously (and omitting margins), the quadrangles form an enormous map spanning ca. 3.1 x 2.6 metres! - Products of a massive, clandestine cartographic project begun under Stalin and ultimately encompassing the entire globe, the Soviet General Staff maps are today noted for their extreme precision. Indeed, even in post-Soviet times they provide the most reliable mapping for many remoter parts of the world: "Soviet-era military maps were so good that when the United States first invaded Afghanistan in late 2001, American pilots relied on old Russian maps of Afghanistan. For almost a month after the United States began a bombing campaign to help oust the Taliban government, American pilots were guided by Russian maps dating back to the Soviet occupation of Afghanistan in the 1980s" (Davies/Kent, p. xi).

Some maps stamped "Is not subject to duplicating and copying" on reverse, with a note to apply to the Joint Stock Co., Moscow, for permits. Light traces of folds, occasional wrinkles and a few odd edge flaws, but altogether in excellent condition. 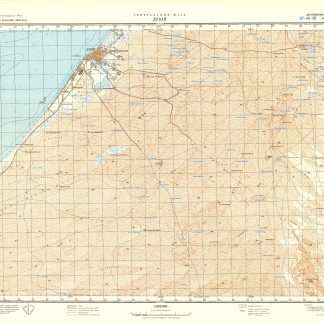