Poisonous animals and plants and their venoms

4to. (8), 333, (6), (1 blank) pp. With Plantin's woodcut device (a pair of compasses in an elaborate cartouche) on the title-page, 52 woodcuts in the text, made for this edition by Jehan de Gourmont after drawings by Geoffroy Ballain, both in Paris, and numerous woodcut initials with pictorial decoration (4 series). Set primarily in roman type.

First edition (the only edition in the original French) of a detailed and well-illustrated account of poisonous animals and plants and their venoms, along with the treatments for their poisoning, whether from bites, stings, contact or ingestion, by the Paris playwright and physician Jacques Grévin (ca. 1538/39-70), who also wrote the eight-page dedication to Queen Elizabeth I of England. The excellent illustrations include snakes, lizards, toads, frogs, a salamander, scorpions, spiders, various insects, centipedes, a leech, skates and other sorts of fish, a rabid dog, a mongoose (for its role in killing snakes), a dragon (!), poisonous plants, including mushrooms, and even a shrew, though its bite is not poisonous. It gives the names of the animals and plants in Greek, Latin and French. It was clearly designed to be issued together with the work that follows: the first French edition (in Grévin's verse translation) of the two surviving works of the Greek poet and physician Nicander of Colophon (active ca. AD 135; frequent later dates appear to be errors): Les theriaques (Theriaca, on poisonous animals and their bites and stings) and Les Contrepoisons (Alexipharmaca, on antidotes and treatments for wounds or illnesses caused by animal, vegetable and mineral poisons). Grévin made his translation from the 1549 Latin translation by the Paris physician Jean de Gorris, and he adds a 10-page verse dedication to De Gorris and shorter verses at the end of each of the two Nicander works. The book ends with a brief life of Nicander and an addendum list. Aldus published the first edition, in the original Greek, in 1499. Plantin's book production is excellent as usual, and the woodcut initials with pictorial decoration are stunning (4 series, 22 to 51 mm, with most of the alphabet for the 39 mm series).

While Grévin's work borrows extensively from Nicander, he goes into more detail and introduces new subjects based on many other classical, mediaeval and modern sources. In the years 1564 to 1567 he had engaged in a published dispute with Loys de Launay on the medical uses of antimony (which is poisonous itself, yet can help to cure diseases), and he presents his arguments on the subject as the final chapter (40 pp.) of his present work. Most importantly, he read the earlier literature critically and sceptically, and considered their claims scientifically, sometimes performing his own experiments to confirm or deny them. In this way he debunks the use of amulets against poisons and other superstitions.

The privilege in both works is dated 7 June 1565 and they are clearly designed to match each other in format and style. Voet notes that Plantin printed both largely in 1565, but stopped the production and resumed with the last sheets only in 1567. Most of the paper has no watermark or a small watermark in the normal position (sometimes hidden in the gutter), but the spacing of the chainlines shows that these sheets come from multiple stocks, sometimes differing even between the two bifolia of the 4-leaf quires in the Nicander. Quires *, T and V of the Grévin show a watermark in the centre of the sheet: an S with a vertical line through it that terminates above in a 4 and below in a tetrafoil. These quires were no doubt among those printed in 1567, and presumably also the Grévin quires X and Y and the Nicander quire A (this last has widely spaced chainlines, 33 mm apart). Plantin apparently first issued the Nicander separately in 1567. Grévin's own treatise, though dated October 1567 in the colophon, is dated 1568 on the title-page and seems to have been issued with the Nicander as a sort of appendix. The two together form a classic of toxicology. In the present copy a printed correction slip replaces the first line on A4v of the Nicander, not noted by Voet. Plantin published a Latin translation in 1571. With two faded early owners' inscriptions on the title-page, only partly legible (someone may have tried to remove them). With the title-page slightly browned, faint water stains at the foot of many leaves and some small worn holes in the fore-edge margin of the last few leaves and the foot of the gutter margin near the end of ad 1, but otherwise in very good condition. The front hinge is cracked, with a small chip at the head of the backstrip, but the binding is otherwise good and the tooling on the spine well preserved. First edition of Grévin on toxicology (with 52 woodcuts, mostly of poisonous animals) and the accompanying first French edition of Nicander on the same subject, printed by Christoffel Plantin. 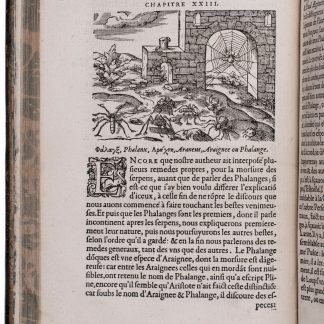