American Intervention in the Persian Gulf

Large 4to. 39, (1) pp. Original printed wrappers (counted in pagination). With a loosely inserted folding board game.

A curious two-player game on the oil conflict in the Gulf, published in "Strategy & Tactics", the magazine of conflict simulation: "'Oil War' is a simulation of a brigade/squadron level of a hypothetical attempt by the United States and various other nations to take over the oil-producing areas of the Middle East. The simulation is primarily of land and air conflict. The game covers an arbitrary period of conflict (sixteen days), in which the issue would be decided. A total of three scenarios are available from which the Players may choose [...]". A remarkable echo of the 1973/74 oil crisis which followed the oil embargo declared by the Organization of Arab Petroleum Exporting Countries, targeting nations perceived as supporting Israel during the Yom Kippur War. By March 1974, the price of oil had risen nearly 400%, from $3 per barrel to nearly $12 globally; U.S. prices were significantly higher. The crisis demonstrated to the industrialised countries their extreme dependency on fossile fuels and even sparked notions such as this of a Western military intervention in the Middle East to secure access to the industry's lifeblood. 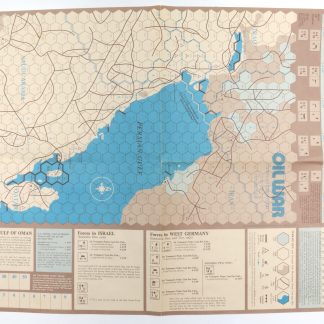