The first Westerner to cross the Rub' al Khali

Thomas, Bertram. Arabia Felix. Across the "Empty Quarter" of Arabia.

First American edition, published simultaneously with the London one. The preface was contributed by T. E. Lawrence. Among the many photograph illustrations is one of the earliest portraits of the Qatar royal family (facing p. 298). "In this book, Bertram Thomas relates some aspects of his journey in which he crossed the Rub' Al Khali (Empty Quarter) from Oman to Qatar, and provides geographical information about the peninsula of Qatar, especially the southern part. He also recorded his observations of the region stretching from the Gulf of Salwa to Al-Rayyan, where he met Sheikh Abdullah bin Jassim Al Thani, Emir of Qatar at the time (1930). The book includes photographs he took of Sheikh Abdullah, Mohamed bin Abdul-Latif bin Mani', and his brother Saleh bin Abdul-Latif bin Mani'. He gives some concise information about Al-Nuaija, Doha towers, and the castle" (Fikri). 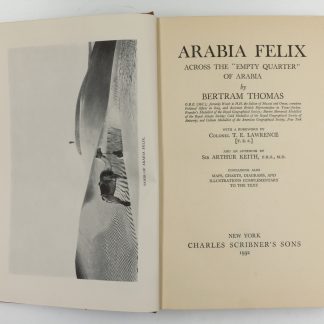