Inhaltsreicher Brief an Ludwig Marcuse mit Anmerkungen zu dessen im Jahr zuvor erschienener Schrift "Sigmund Freud. Sein Bild vom Menschen": "[...] Unfortunately in writing about Freud's personality in the first chapter you have suffered the same fate of the many other approaches to the subject. It seems always to stir some unconscious conflicts which lead to serious misinterpretations and incorrect hypotheses which only add to the distorted legends of that personality which are so frequent. It even affects the capacity to quote correctly simple facts even when they are perfectly clear in my biography. Thus Freud did not see his mother naked between the age of 2 and 2½, but precisely when he was three and a half (S. 17). Freud's difficulty in expressing his angry emotions was that he could not make them literaturfähig, not literarisch-historisch (S. 25). Prof. Putnam was not present at the first Psa Congress (S. 35); the only one he ever attended was the second. Freud's Eisenbahnangst, which you say was not neurotic, was certainly neurotic and could lead to fainting fits in the railway station [...] No one who knew Freud personally would ever have thought of him as either melancholisch or a Grobianus. He had excellent social manners and a constantly cheerful temperament to the end of his life. He once referred to himself as a 'cheerful pessimist', but he explained carefully that what people meant by pessimist was realist: a sceptic who doubted the practicability of achieving idealistic visions (such as the communist one) [...]". 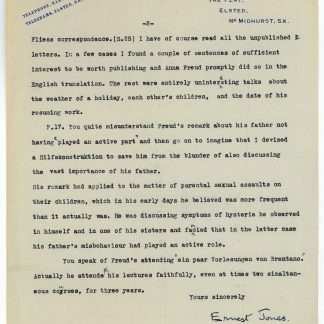