Extremely rare illustrated account of the trip taken by the Zurich gymnastic club "Alte Sektion" to the French national gymnastic festival held in Tunis on Easter 1912. It narrates the participants' 42-hour journey by ship from Marseille to Tunis as well as their impressions of the city before going on to describe the festival, including the Zurich squad's procession and the athletic competition. Instead of returning immediately after the festival, the group stayed in Africa for another week to visit Carthage, Dougga, Testour, and Constantine.

The full-page illustrations include the Zurich squad in their gymnastic attire and a Bedouin family with several camels. Loosely inserted are 14 original vintage photographs, some of them with contemporary pencil inscriptions on verso, further documenting the journey aboard the steamer, the short stay in Marseille, the festivities, palm trees before the Tunis cathedral, the trips to Dougga and Carthage, and a Tunesian procession.

Title-page with a few small marginal tears, otherwise in perfect condition. A very well preserved item commemorating the wide reach of the European gymnastics club movement. Not in auction records; the only other copies known are held at the Zentralbibliothek Zürich and the German National Library, Leipzig. 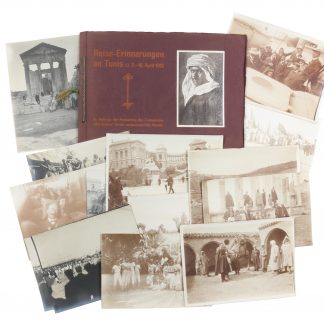