4to. (16), 328 pp. With woodcut title-vignette, 27 woodcut plates (24 of which folding) and numerous woodcut illustrations in the text. Later full calf with gilt spine and gilt spine label, as well as additional handwritten spine label. All edges red.

Third, enlarged Italian edition of this "important and independent" (Jähns) artillery manual first published in Venice in 1586 in Italian, then in a more extensive edition in 1592 in Spanish. This was followed by a second Italian edition of 1606, no mere re-issue of the 1586 edition, but "sufficiently different to be considered a distinct work", making this third edition in fact the second one of the "Prattica manuale" in its final, revised form. "Of particular interest are Collado's notes on the artillery school in Burgos, founded by Charles V" (Jähns). The illustrations mostly show cannons and their positioning in the field and on fortifications, as well as projectiles and ballistics.

Binding insignificantly rubbed, otherwise a good copy. Provenance: from the collection of Thomas Fremantle, 3rd Baron Cottesloe (1862-1956), commander of the Territorial Army and president of the Society for Army History Research, with his loosely enclosed autograph note signed: "This book has diagrams & contents closely similar to those of my Italian MS of 1581. Cottesloe 1927". 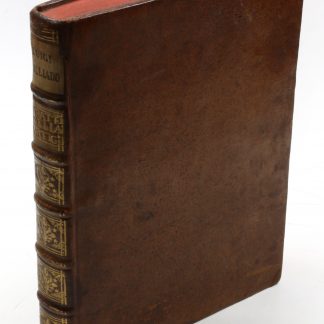