Pre-printed table filled in by hand, detailing British military forces stationed in Britain and around the world, including the Caribbean, India, Africa, and Australia. Includes the names of regiments as well as the numbers of commissioned and non-commissioned officers, and the enlisted rank troops ("Rank & File"), distinguishing those fit for duty from those on the sick list, with a total of 238,978 regular forces and 91,586 militia.

Binding insignificantly rubbed at the hinges; interior crisp and clean. Heraldic bookplate incorporating a ducal coronet and Bentinck family crest to pastedown, a pencil note on the flyleaf ascribing it to the Duke of Portland's library. Later in the collection of Thomas Fremantle, 3rd Baron Cottesloe (1862-1956), commander of the Territorial Army and president of the Society for Army History Research. 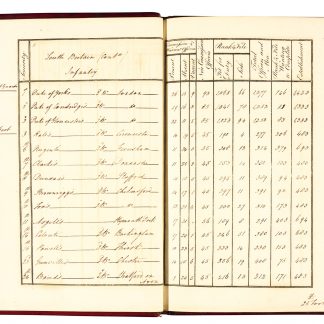