[Le Marchant, John Gaspard]. Rules and Regulations for the Sword Exercise of the Cavalry.

(Bound with) II: [War Office]. An Elucidation of Several Parts of His Majesty's Regulations for the Formations and Movements of Cavalry. London, War Office, 1808. (6), 84. With 32 numbered folding engraved plates.

Early edition of this detailed work on the use of the sabre, both in infantry and cavalry, first published in 1796. It describes and illustrates infantry positions, foot drill, fencing positions, guards including the "arm-bridle guard", cuts, parries, battle, sword exercises, moves, and commands, as well as positions on horseback, including attack, parry, and en garde. Among the illustrators were the Irish critic and engraver William Paulet Carey (1759-1839) and the London-born engraver Samuel John Neele (1758-1824).

II: Fourth edition of this manual of formations of the cavalry, first issued in the 1790s, divided into two parts. The first explains several of the King's regulations for the cavalry, including the construction and wheeling of squadrons; the second discusses changes of position and movements of attack.

III: Second edition of the textbook of cavalry manoeuvres intended for the instruction of aspiring officers, demonstrating various battle formations and the corresponding words of command.

Hinges broken; binding somewhat rubbed. A few marginal tears to paper, not affecting text or image. Bookplate of the Royal Army major Thomas Pelling Lang (d. 1838) to front pastedown; his handwritten ownership to title-page. Later handwritten notes of the publication dates of the three works and Carey's name in pencil to verso of half-title. From the collection of Thomas Fremantle, 3rd Baron Cottesloe (1862-1956), commander of the Territorial Army and president of the Society for Army History Research. 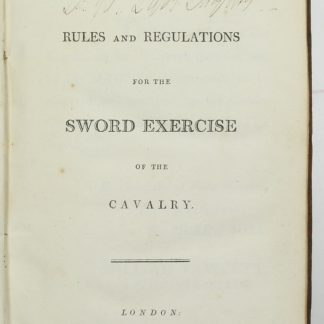 Sie sehen: [Le Marchant, John Gaspard]. Rules and Regulations for the Sword Exercise of the Cavalry.London, 1814. € 800,00
In den Warenkorb