[Cavalry - London and Westminster Light-Horse Volunteers]. The Light-Horse Drill. Describing the Several Evolutions, in a Progressive Series, From the First Rudiments, to the Manoeuvres of the Squadron [...].

Second edition of this anonymously composed manual of horse drill intended for members of the British volunteer corps, discussing and illustrating the formation of squadrons as well as cavalry movements, including wheeling and counter-marching. The frontispiece, showing a mounted officer, was drawn by G. Garrard, an Associate of the Royal Academy, and engraved by Thomas Morris. 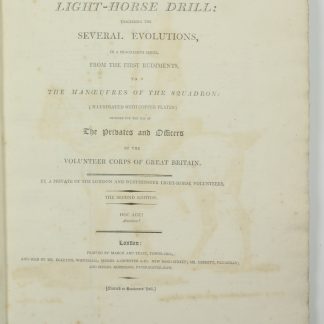