First edition. Very scarce treatise on military drill by Hendrik van Buren, a lieutenant in the Dutch States Army, signed by the author in his own hand on the last page of the preliminaries. The illustrations show the correct handling and presentation of muskets and pikes.

The "Drilkonst", which saw a second and third edition in 1672, forms part of the 17th century Dutch tradition of drill manuals: after 1590 William Louis and Maurice of Nassau, stadtholders and captains-general of Friesland and Groningen, introduced important tactical reforms that would be copied by other European armies, thereby engendering a tactical military revolution in the first half of the 17th century. Soon, manuals providing step-by-step tutorials were produced to spread the word of the new standards.

Several plates trimmed quite narrowly, but in all a fine copy from the collection of Thomas Fremantle, 3rd Baron Cottesloe (1862-1956), commander of the Territorial Army and president of the Society for Army History Research.

Rarely seen at auction. This first edition not traceable in STCN; only a few copies in libraries worldwide, one in the United States, none in the Netherlands. 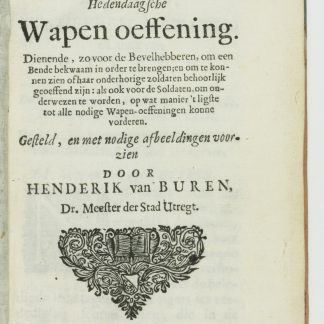