Dedicated to the Master Falconer of James I

Latham, Simon. Latham's faulconry, or The faulcons lure and cure: in two books. The first concerning the ordering and training up of all hawks in generall; especially the haggard faulcon-gentle. The second, teaching approved medicines for the cure of all diseases in them.

Small 8vo. 2 parts in one volume. (34), 176; (24), 144, (8) pp. With woodcut frontispiece of "The Haggard Faulcon" instead of the additional engraved title-page found in some copies. Second title with woodcut vignette of a gentleman riding his horse with his hawk on his arm. Second part with woodcuts in text, woodcut head-pieces and decorative initials. 19th century calf, prettily gilt. Marbled endpapers.

Pocket-sized reissue of Latham's books on falconry, the former of which had first appeared in 1614. "Latham dedicated this, his first book of Falconry, to Sir Thomas Monson (or Munson, as he phonetically spells the name), Baronet, Master of his Maiestie's Armory, and Master of the Hawkes to his Highnesse" (Harting, p. 15). The second part is Latham's "New and Second Book of Faulconry", first published in 1618 and "usually bound up with the first" (Harting, p. 16). "Ordering and training of all hawks in general and especially the haggard falcon gentle. Approved medicines for the cure of all their difficulties. A very rare and valuable work" (USAF Academy Library, Special Bibliography Series No. 38: Falconry, p. 14). The frontispiece depicts tools of the falconer's trade.

Some spotting and staining throughout; lacking final blank. Lower corner of fol. A2 in the first part torn with slight loss of text (professionally remargined). From the personal collection of the gentleman and Knightsbridge manuscript dealer Myles Colbeck Radford (1897-1963) with his armorial bookplate to front pastedown. 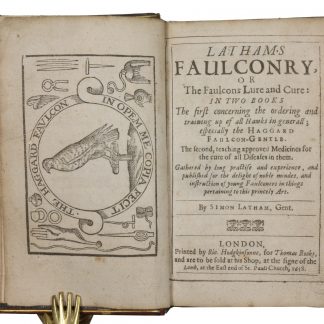