Powys, Thomas Littleton, 4th Baron Lilford / Trevor-Battye, Aubyn (ed.). Lord Lilford on birds. Being a collection of informal and unpublished writings by the late President of the British Ornithologists' Union [...].

4to. XVII, (1), 312 pp. Title-page printed in red and black. With engraved frontispiece and 12 plates. Contemporary full cloth with gilt hawk on front cover, giltstamped title to cover and spine.

Posthumously published work of natural history by the distinguished British ornithologist Lord Lilford (1833-96), whose aviaries at Lilford Hall, installed in the 1890s, aroused the envy of field ornithologists of the day and were especially noted for the collection of birds of prey. Edited by his friend, the traveller, naturalist and writer Aubyn Bernard Rochfort Trevor-Battye (1855-1922), it includes descriptions of the Lilford Hall premises, its ponds, paddocks, and aviaries, as well as notes on otter hunting, and an introduction to falconry written by Reverend Gage Earle Freeman, which, in matters of introducing the sport, is regarded "the best short essay ever written" (Barber). It features quotations from Lilford's earlier publications, as well as private letters, and a speech he gave in his role as President of the British Ornithologists' Union in February 1894, as well as some sections from the journal Lilford kept during his travels in the Mediterranean in 1874, 1878-79, and 1882. In addition, the work comprises an appendix drawing from Lilford's notes on everyday events in his aviaries, stating for example that his "English raven rolls and enjoys himself in the snow" (p. 272), as well as a complete list of his publications. The illustrations, carried out by the Scottish painter Archibald Thorburn (1860-1935), are studies of individual birds in the Lilford aviaries, showing, inter alia, Lämmergeier, cranes, a golden eagle in its nest, a trained goshawk sitting on a falconer's hand, two ruffs fighting, flamingoes, and a Greenland falcon. The frontispiece depicts Lilford in his study with a dead falcon lying on his desk as well as a live song bird sitting on his backrest. 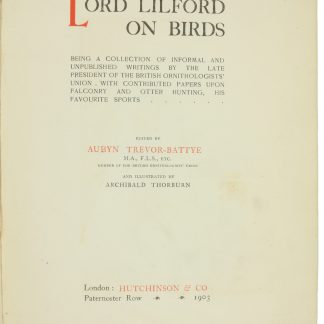