Re-issue of this important guide to falconry by the "grand old man of British falconry" (Gallagher), Ronald Stevens (d. 1994), first published in 1956. The book questions several age-old concepts of the sport, such as the attempt of teaching falcons to wait on through flying to the lure, and introduces methods of teaching the birds to home to the falconer's house, which "caused a great deal of rethinking among falconers" (Gallagher).

Stevens settled in the remote Fermoyle Lodge in Connemara in Ireland in the early 1960s, the place quickly turning into something of a Mecca for falconers from all across the world, his treatises inspiring generations of aspired falconers.

Handwritten ownership of Charles Garton, dated Wadeford House, December 1987, to front pastedown. A typescript letter signed by John Cox from The Clock House bookshop to Garton is loosely enclosed, regarding his order of "A Falcon in the Field" by Jack Mavrogordato (London, Knightly Vernon Ltd., 1966), which could not be fulfilled as the work was not to be reprinted due to the author's recent death, offering to send him Stevens's work instead. With Garton's autograph reply on the same sheet, accepting the offer, and asking Cox to refund him the difference. The Clock House's advertisement for "A Falcon in the Field", with handwritten notes by Garton, is stapled to the letter. 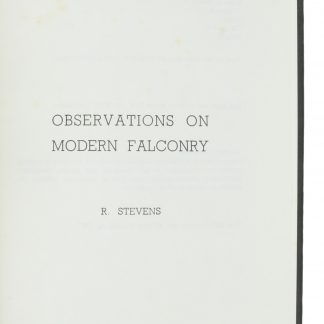