Small 4to. XVI, 192 pp. With photographic frontispiece, 11 photographic plates, and 9 illustrations in the text. Original full cloth with giltstamped falcon to cover and giltstamped spine-title.

First edition. An authoritative textbook, one of two classics on falconry to appear in 1960 (the other being Jack Mavrogordato's "A Hawk for the Bush"). It discusses the choice of hawk for training with the necessary furniture and appliances, individual species used in falconry, their particular challenges in training and management, their handling when flown at quarry in the field, falcons' home life, their health and disease, as well as how to deal with lost hawks, and the moult.

With contributions by S. E. Allen and Jack Mavrogordato on game hawking and rook hawking. The impressive illustrations display various birds of prey, including lanners, sakers and peregrines, as well as merlins, kestrels, and goshawks, sometimes hooded or on perches. One photograph shows a young boy working with a kestrel. The other illustrations show the equipment typically used in the sport, including the falconers' knot, hoods, jesses, and bells. 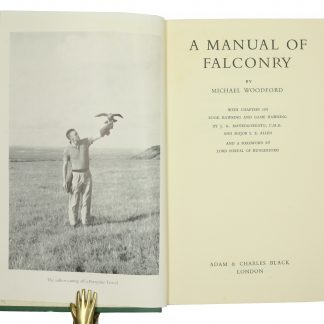