In English, to Commodore Isaac Hull, in response to the protests formulated by Hull and Commodore Thomas Brown, relative to the naval blockade of Callao during the Peruvian war of independence: "[...] It is very satisfactory to me to be able to assure you that my answer is almost entirely in accordance with the sentiments which you & Comd. Brown have manifested to me in defence of the rights of Nations; on my part, my greatest care will always be to preserve inviolable the friendship which the United States have deemed well to profess towards us [...]".

"From 1824 to 1827, Isaac Hull commanded the Pacific Squardon, and a great deal of that period he spent in the city of Callao in Peru, during Simon Bolivar's brilliant liberation of Peru, and excellent relations were constantly maintained between the two officers" (P. F. Kenny: Heroes, Villains, and Conflicts [Xlibris, 2016], s. v. Isaac Hull).

With: 17 letters or documents relative to the blockade of Callao and its consequences, including 6 signed letters, the rest contemporary copies, April to December 1824 (4 in Spanish and 13 in English).

Thomas S. Hamersley, lieutenant in the United States Navy, letter addressed to Cdr. Charles Stewart, commander of the naval forces in the U.S. based in the Pacific Ocean.

Isaac Hull, commander in chief of the U.S. Navy fleet in the Pacific (4 letters including a duplicate): to General Simon Bolivar to protest the blockade, but also to side with him concerning human sufferings; 3 letters to Samuel Southard, American Navy secretary; and one letter to Stanhope Provost, vice-consul of the U.S. in Lima.

Tomás de Heres (to Hull); instructions given by Bolivar to the Vice-Admiralty of the Peruvian naval fleet; documents received by the Navy department of the U.S. or transmitted to General Bolivar, state of the naval forces in the Pacific etc. 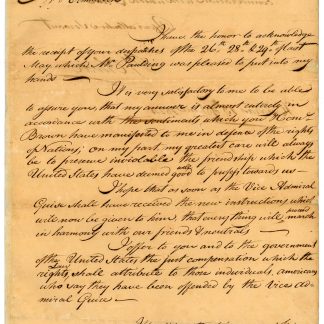