Interesting compilation of alchemical notes in Latin. It was the sale of Newton’s archives in 1936 that revealed the extent of his interest in alchemy, hermetics and unorthodox theology. Sources and quotes are indicated with great precision and denote an attentive reader. Many are taken from the "Septimana philosophica" of Michael Maier (Frankfurt, 1620), of which we know that Newton owned a copy (John Harrison, The Library of Isaac Newton, 1046). The "Symbola aureaea mensae duodecim nationum" by the same author (Frankfurt, 1617) are also a source (Harrison 1048; National Library of Israel, Jerusalem, coll. S. M. Edelstein), as well as the "Hieroglyphica aegyptio-graeca" (London, ca. 1614?). Michael Maier (1568-1622) was a German physician and alchemist who travelled to the court of Rudolf II in Prague and became his personal advisor. Upon Rudolf's death in 1612, Maier made his way to England, where he published a number of alchemical works and hermetic philosophy.

An entry in the present manuscript found on page 3 reads: "Infantis philosophici parentes et nutrix [...]". This is actually a string of references from "Tab[ula] Smaragd[ina]", Grasshoff, "El Raymund in Theorica Testamenti" (Raymond Lull), the "Hierogl[yphica]" of Maier, and Laurentius Ventura. The difference in the colour of ink suggests that these references were added at a later date.

Other quotes are taken from Artephius and Nicolas Flamel (Newton spells the name "Flammel"), as found in the "Philosophie naturelle de trois anciens philosophes renommez", Paris 1682, that Newton owned in two copies (Harrison 1309-1310, Trinity College); from Rosinus (as found in "Artis auriferae", tom. I, pp. 158-204); and from the "Liber Abre" (p. 334 of the "Musaeum hermeticum", Frankfurt 1677: Harrison 1131, Trinity College). This reference allows for a terminus post quem date for the present manuscript of after 1677, likely in the 1680s. 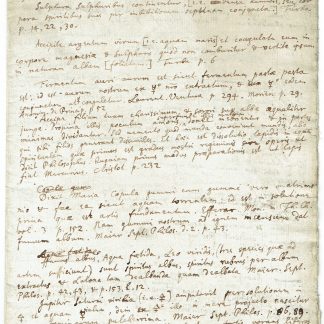