Russian trade with Nanking: unpublished account of a Russian embassy to China

An apparently hitherto unpublished account of the Russian embassy to China in 1805-06, written by the embassy's historiographer Rochus van Suchtelen.

The Russian minister of commerce, Nikolai Rumiantsev, supported a policy to continue the work of his father, Marshal Rumiantsev, that aimed to foster the Russian advance on the southern frontier. He was also determined to challenge Japan in the Pacific and to assert Russia's authority along the entire inland border from the Kazakh steppe to the Pacific (cf. Le Donne, p. 173). "In January 1805, [Rumiantsev] advised Alexander I to broaden the scope of an expedition to Peking [...] The embassy would seek China's agreement to open up both Canton and Nanking to Russian trade, to allow that trade not only on the tiny Bukhtarma but also along the entire Irtysh Line, and to let Russian caravans cross Chinese Turkestan on their way to India through the Karakoram Pass. The choice of ambassador fell on Count Iurii Golovkin [...] His instructions incorporated several of Rumiantsev's proposals. They also called for the opening of trade at Ili and Tarbagatai, the opening of the Amus to Russian shipping and the appointment of a consul at the river's mouth, the establishment of diplomatic relations with Peking with an ambassador in the Chinese capital, and the sending of 'supervisors' with Kalmyk pilgrims going to Lhasa in Tibet" (ibid., p. 174).

Politically, Golovkin's mission was a total failure: the Chinese kept the ambassador waiting at the border, parleying for some weeks over the size of the party (more than 200 men). After the embassy had finally proceeded to Urga, protocol issues of such complexity arose that the entire Russian party returned to Siberia. Yet the expedition was not without importance from a scientific point of view, for research conducted during the expedition by several participating scholars and scientists would give an impetus to further important investigations. The most noteworthy scholars among the embassy to China were Heinrich Julius Klaproth, who served as interpreter; Nikita Yakovlevich Bichurin, generally regarded as the founder of Russian sinology; Joseph Rehmann; and the botanist Ivan Ivanovich Redovski.

Binding somewhat worn. Provenance: Jan Peter van Suchtelen, count of Liikkala (1751-1836), with engraved armorial bookplate and inscription on front flyleaf: "This account is in the hand of my uncle the educator Roch van Suchtelen - historiographer attached to the embassy" (transl.). Later in the library of Swedish antiquarian bookdealer Björn Löwendahl (1941-2013). Another manuscript copy of van Suchtelen's diary is kept at the Rossiiskii gosudarstvennyi arkhiv diplomaticheskikh aktov (RGADA), 188, MS collection, op. 5. no. 425. 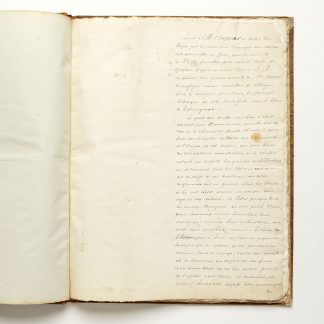