Updated 1852 edition of Norie's very rare and monumental sea chart of the Indian Ocean, one of the 19th century's greatest works of maritime cartography. The present sheet embraces the southern coasts of the Arabian Peninsula, including the coasts of Oman, Yemen, and much of the Red Sea coast of Saudi Arabia, up as far as Yanbu, including the Jeddah-Mecca area. In Africa the chart includes the coasts of Eritrea, Djibouti, Somalia, Kenya, and Tanzania, while the Seychelles appear within the Indian Ocean itself. The quality of the hydrography and engraving is exquisite. The antecedent chart of the present work was first issued by William Heather in 1799 but was re-engraved and dramatically updated in 1833 by Heather's successor J. W. Norie. The present edition was issued by Norie's successor firm, Norie & Wilson, featuring the latest updates.

Pronounced staining and crackling with minor loss to middle of left blank margin, some light staining in other areas, some short tears emanating from the margins; some offsetting in lower part of chart. Altogether well preserved. 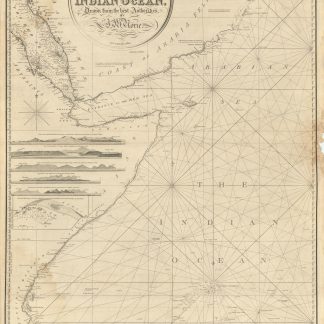