The "Kitab al-Hajj" (i.e., "The Book of the Pilgrimage [to Mecca]"), forming a single volume (most likely the second out of a total of five or six) of the famous Shiite hadithic compilation known as the "Tahdib al-Ahkam" ("The Refinement of [Legal] Judgments"). The pilgrimage to Mecca is one of the five compulsory duties which every Muslim with the physical and economic means must perform at least once in his lifetime.

The manuscript is written in a typical bookhand employed for copying hadith literature, directly derived from a variant of Near-Eastern bold, non-serif naskh. Neither the scribe’s name nor the place or date of production of this book are given, but it is reasonable to assume an Iranian provenance (possibly Isfahan, one of the capital cities of the Safavid dynasty) and a date from the early to mid-17th century, based on an inscription in Arabic on the first leaf: "[This was] introduced [?] by the sinful servant (al-abd al-mudnib) ar-Raji ibn Mohammad Reza Mohammad Taqi ar-Razi, in the Dar as-Soltanat, Esfahan, 1049 H" [1639/40 CE].

Several handwritten ownerships, including one signed by "Mir Ali al-mushrif" (the Inspector?) and dated 1213 H [1798 CE], with invocations of Allah and brief prayers (in the upper central space of the first leaf). Unterneath this ownership statement are four lines in unpointed Arabic lines, providing a table of contents: "Kitab al-Hajj" ("Book of the [mandatory] Pilgrimage [to Mecca]"), "Kitab al-Jihad" ("Book of the holy war duties"), "Kitab al-Qadaya wa’l-Ahkam" ("Book of the Judgments and Legal Requirements"), "Kitab al-Makasib" ("Book of Acquisitions"), and "Kitab at-Tijarat" ("Book of trading discipline").

The manuscript stands out as a high-quality copy of a masterpiece of the Shiite hadith science and appears to have been preserved in fine condition to this day. 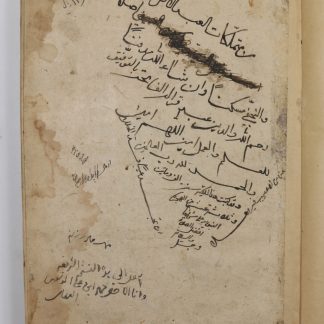