The Portuguese dominions in Asia with views of Hormuz and Muscat

Very rare first edition, with an impressive iconographic setting. A trove of information regarding the Portuguese involvement with China (most notably the Chinese missions), the wars between the Dutch and the Portuguese in Macau, the trade relations with India and the Portuguese outposts there (Daman & Diu). Most notably, it deals extensively with the history of the Arabian Gulf, narrating the capture of Ormuz in 1507 by the Portuguese Afonso de Albuquerque which gave the Portuguese full control of the trade between India and Europe passing through the Gulf. It also speaks of the discovery of Baharem and Catif and the wars with King of Al-Hasa. Also the aspect of trade is described: there are several mentions of "the Fishery of Pearl, so famed that draws all Mankind thither". Faria y Sousa also gives accounts of later events such as the building of "forts of great strengths" in Muscat, after the fall of Ormuz in 1622 which opened up the Persian trade with England in the Gulf. This one of the very few sets on the market with a full set of plates.

Some browning and intermittent water-staining or fingermarking. Early ownership inscriptions on title-pages illlegible due to ink corrosion, affecting paper. Rare in the trade. 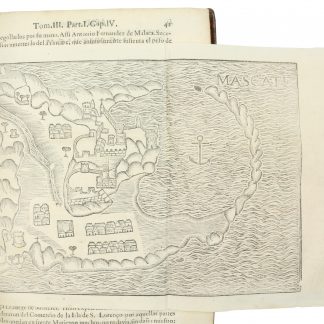