Khatib al-Tibrizi, Muhammad ibn `Abd Allah / Matthews, Arnold N. (transl.). Mishcàt-ul-Masábìh, or, a Collection of the Most Authentic Traditions, Regarding the Actions and Sayings of Múhammed; Exhibiting the Origin of the Manners and Customs, the Civil, Religious and Military Policy of the Muslemàns.

The "Mishkat al-Masabih" ("A Niche for Lamps") of Al-Khatib al-Tabrizi (also known as Wali al-Din, d. 741 H), a revised and expanded version of the "Masabih al-Sunnah" by al-Baghawi, with approximately 1500 hadith added. This important Sunni text was first translated into English by Capt. Matthews of the Bengal Artillery. Although some of the original hadith are not included and others incorrectly translated, this attempt at publishing a translation from the Arabic was a noted accomplishment for the time.

The List of Subscribers accounts for 122 copies, with an additional 100 copies noted as being published on order of the Governor General in Council for the Honourable Company. A statement in an 1848 issue of the Journal of Sacred Literature suggests that most copies of the work were destroyed at sea, yet it was still advertised for sale in 1817 in the Literary Panorama (at the price of £4.4s).

Some browning throughout, more pronounced in endpapers. A short tear to lower edge of vol. 1. A good copy of this rare Calcutta imprint, bound in India. 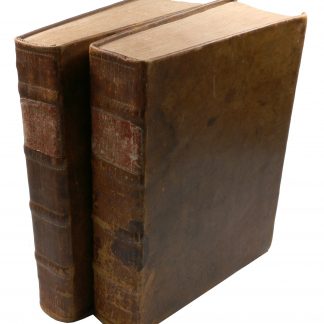