The British-Indian Army's official account of the 1919-20 Waziristan campaign, marked "Confidential" on the title-page. The operations followed unrest that arose in the aftermath of the Third Anglo-Afghan War; they were conducted in the mountainous region of Waziristan (now in Pakistan) by British and Indian forces against the fiercely independent Waziri and Mahsud tribesmen that inhabited it. Since the 1870s, the British government agencies were assiduous in compiling internally published histories of their military frontier operations, with the intention of providing a "valuable guide" to such British commanders and policymakers as "might have future dealings with these turbulent neighbours" (as the Punjab Government phrased it in 1866).

Serial No. 1235 stamped to title-page. Occasional light marginal staining. A few edge flaws consistent with army use, repaired by a contemporary owner. In all a well-preserved, complete copy. 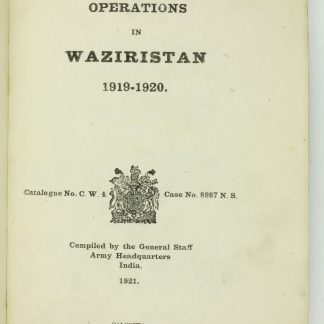