One of the few written sources about the Arab conquest of Sindh (now in Pakistan) and the origins of Islam in India, translated from a 13th century Persian text by Ali, son of Muhammad Kufi, itself the translation of an undated Arabic manuscript. A chronicle of the Chacha dynasty, following the demise of the Rai dynasty and the ascent of Chach of Alor to the throne, down to the Arab conquest by Muhammad bin Qasim, it narrates the Arab inclusions into Sindh of the 7th to 8th centuries, concluding with an epilogue on the tragic end of the Arab commander Muhammad ibn al-Kasim and of the two daughters of Dahir, the defeated king of Sindh. Co-opted by various interest groups for centuries, the Chach Nama has significant implications for modern imaginings about the place of Islam in South Asia, that remain disputed to this day.

Handwritten ownership in ink to upper wrapper. Light foxing to covers and variously throughout. Altogether a good copy of a rare work; no copy in auction records. 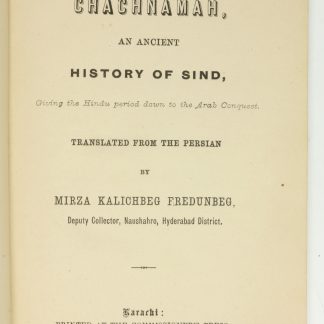