Parfit, Joseph T[homas]. Among the Druzes of Lebanon and Bashan.

An account of missionary work in Mount Lebanon, with a description of the Druze people, their history and their faith. Parfit narrates "seven years' work amongst the secret sects of Syria", focusing on the establishment of mission schools in the mountainous lands south and east of Beirut, where many Druze communities were based. To the main narrative of school-building and teaching, he adds much on relations between the Druzes and other communities (including animosities with the Maronites), and significant events such as the dangerously severe Winter of 1911.

The book is attractively illustrated with the author's photographs and each chapter is preceded by a line from "Arabian Wisdom", a collection of Qur'anic quotes and proverbs compiled by John Wortabet. 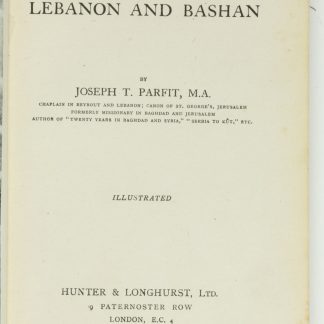