A beautifully illustrated history and guide to the Arab Museum based in the Khan Murjan of Baghdad, printed in Arabic throughout.

The Khan Murjan was built in the 14th century by Aminuddin Murjan (d. 774 H / 1372 CE). The building was designed as a caravanserai and, for centuries, housed merchants, scholars and travellers passing through the city. With two stories of rooms, a high-ceilinged central hall and beautifully ornamented windows and arches, it was (and continues to be) an important and handsome example of Islamic architecture.

Due to later periods of neglect and flood damage, the building languished in semi-ruin for close to two hundred years. Then, in the early 1930s, Sati' al-Husri (1880-1968), the Director of Antiquities, ordered renovations and repairs so that it could be reborn as a museum dedicated to Islamic artefacts.

Some chips to head and tail of spine, a few closed tears to extremities, spine slightly sunned. A very good copy of an innately fragile publication. 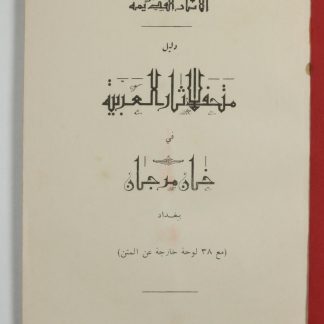