18 stiff card leaves with 61 black and white photographs, adhesive mounted on both sides, with a few items of ephemera. All photos have detailed captions on applied small sheets of typescript.

An album depicting India with an emphasis on Hindus engaged in religious rituals, many of which appear quite painful. It was created by a missionary in Benares, India, W. K. Norton, who deemed these images "self-torture". His goal in creating the album was to raise funds for the mission by showing "the great need the Hindu people are in for 'something better', that is found only in accepting the Lord Jesus Christ as their personal Saviour". To further drive home the need for funds, one caption for a photo named "Devil Dancers in India" reads "worshiping the devil is a part of nearly all heathen religions". As of 1930, it seems Norton's fundraising efforts were suffering, as his newsletter included here shows that financial conditions were dire and that there was "a serious lack of interest which alarms us".

Around 25 photos show people engaged in self-suffering. These include men who held their arms above their heads for years, one who has moved his foot above his shoulder, and several which show people lying on beds of nails or spikes, including a young boy. Others show a man with his head buried in the ground, while another shows a man buried up to his head. One shows people lying on cacti, another shows a man who vowed he would never again lie down so he slept suspended by ropes under his arms. A couple show a man hanging by his feet, his head just over a fire. Two show a man getting hooked in his back and then suspended far above the ground to swing. Other views include street scenes in villages, people worshipping stone figures of snakes and the tulsi plant, and animal sacrifices. There are two shots of preparation for a cremation, one of a souvenir shop, another showing a crowd of thousands bathing in the Ganges, and more. Although more than one online reference states Norton was the photographer, four of the photos in the book are clearly commercial, and a few appear to be photographs of photographs. We know that Norton and his wife produced another original photograph book of 12 pages in the 1920s with two copies in institutions. OCLC locates no copies of this expanded work, but we note the online sales of two others since 2012 with 61 and 53 photographs respectively.

In very good condition: front wrapper with light foxing and surface abrasions, a couple of leaves with small stains; photos fine save for two with small losses. An outstanding album filled with arresting images, all described in great detail. 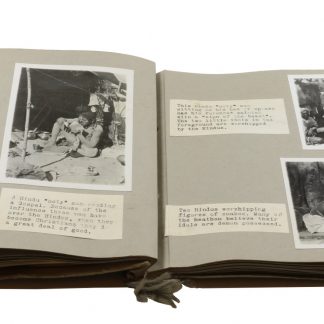