The virtue of prayer

Arabic manuscript on the virtue of prayer upon the Prophet Muhammad. The very neat cursive calligraphy is finely executed in three inks: black, red and gold (the latter having taken on an olive green hue). The manuscript begins with the last three suras of the Qur'an, followed by the Asma ul-Husna, an introduction, and a prayer. A superb frontispiece on a double page (pp. 5-6) is executed in black ink on a red background within polychrome frames. The one on the right-hand side, decorated with five outward-facing arches in the margins, gives the names of Allah, of the Prophet, and of his four caliphs; the panel on the left indicates the name of the manuscript and its author, "Abi Abdallah Hashim ibn Abdulaziz al-Mohammadi al-Shafei". The titles of each of the six chapters are written in red ink or gold, followed by the "Bismillah" in larger calligraphy. The first colophon, at the end of the first chapter, is calligraphed in red ink in a banner; the other three colophons, arranged within triangular tiers, announce the end of each chapter and repeat the name of the author. The text ends with the "Qasida" to the glory of the Prophet. The analysis of the document and the use of the term "Shafei" suggest that its author was an imam trained in the Shafiist school of jurisprudence, one of four schools (madhhab) of jurisprudence within Sunni Islam, based on the teaching of Imam Al-Shafi'i (767-820) and his followers. This "madhhab" is widespread in Yemen and around the Horn of Africa (Djibouti, Eritrea, Ethiopia, and Somalia), as well as in Kurdistan and Egypt. Binding and paper suggest a date in the second half of the 18th century. 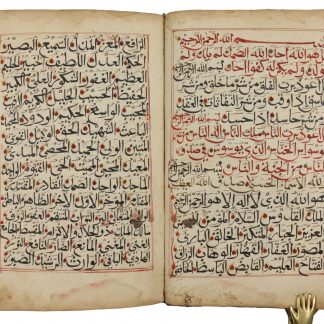