Rare Beirut-printed edition of this 13th century world chronicle by the great Syrian theologian Bar-Hebraeus (Abulfaragus, 1226-86), first edited by Edward Pococke in 1663. Bar-Hebraeus focuses on the Middle East and the reigning Muslim dynasties as well as on the East and West Syrian Christian churches, covering extensively the rise and spread of Islam and relations between the Christian and Islamic worlds. His account of the destruction of the Alexandrian Library, placing it at the time of the Islamic conquest of the city in 642 and claiming that the books were used as fuel for the ovens in the bath houses (!), contradicts most sources, which place the destruction much earlier. Even for the early periods, Bar Hebraeus makes use of sources that have since been lost, but his most original contribution remains what was in his day recent history.

Bar-Hebraeus, born in what is now Turkey, became Bishop of Gubos in the Syriac Orthodox Church in 1246 and worked in Aleppo from 1252. He wrote the present work in ancient Syriac but translated it into Arabic himself. As Pococke's 1663 publication (with a Latin translation) was the classic edition of the Early Modern period, the present edition is the received modern one.

Binding somewhat rubbed at extremeties. Light browning and brownstaining throughout, but in all a good, tight copy. 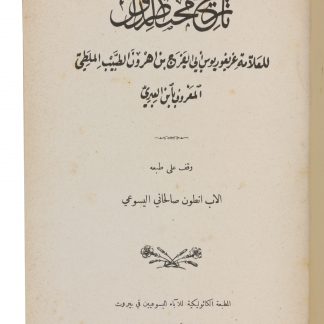